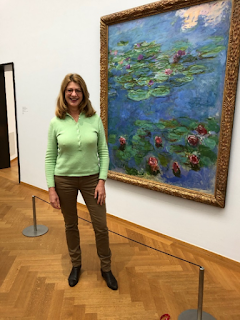 Once again, the Expat Committee has asked art historian and resident of Benoordenhout, Monique Varma, to give an art lecture. Last year, Monique spoke about many artists of the Hague School, whose names are memorialised in many of the street names of the neighborhood.
But there are also several artists honoured in this way in Benoordenhout, who were not part of the Hague School, but lived at the same time, namely the end of the 19th century, early 20th.  Monique’s lecture will concentrate on these painters, such as George Breitner and Willem Witsen of the Amsterdam Impressionism movement, Piet Meiners, an aquarellist and etser, and Ferdinand Hart Nibbrig.  Another lesser known artist is Jan Mankes, who died tragically at the age of 30.  And last but not least, Monique will include one her ancestors, the Dutch-French Romantic painter, Ary Scheffer.
This afternoon promises to be a real treat as Monique is an accomplished lecturer and guide. She had the room mesmerized last year with her two-hour lecture, full of anecdotes and amusing stories. Monique graduated from Leiden University with a a dual major in French Language and Literature and Art History. Working more than 18 years as a free-lancer, she gives both guided tours at the Kunst Museum (formerly Gemeente Museum) and bus tours around the city.

There is no charge for this event, but space is limited, we kindly ask that you register with Marja van Loopik, vanloopik@casema.nl if you would like to attend.

A walk at Clingendael